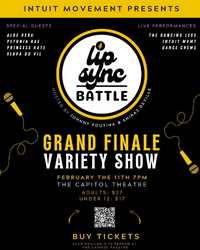 The evening will take the form of a Variety Showcase, hosted by Johnny Poutina and Shiraz Deville, performances by The Dancing Legs and Intuit Movement Dance Crews, and comedic commentary by an esteemed panel of hilarious judges.

You’re going to be so full of entertainment you’re not going to know what hit you.