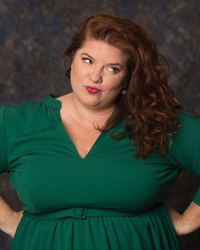 This show is part of the CAPITOL SEASON.

Between touring her headline act and appearances on such hit shows like CBC’s The Debaters, Jane has appeared alongside the likes of Tom Green, Tig Notaro, Arie Spears, Godfrey, Bobby Lee, Natasha Leggero and SNL’s Michael Che.

Sharon Mahoney is an award-winning comedian, actress, and street performer who has travelled the globe for over twenty years performing at world-class festivals and comedy clubs. Sharon has performed in Australia, NZ, USA, Europe, UK, United Arab Emirates, Singapore, Africa, and more. With a background in improvisational acting from Second City in Toronto and a degree in Theatre Arts and Psychology, Sharon is a versatile performer, who successfully provokes and pushes the boundaries of social norms. Her stand-up comedy can be seen on national TV, she has recorded for Just For Laughs Originals, and she headlines and hosts comedy clubs around the world. Her most recent award-winning solo show; was produced at the Edinburgh fringe and toured festivals in Australia, UK, and Canada with rave reviews, sold-out houses and standing ovations. Sharon is an incredibly engaging performer who strives to make a connection with her audience while metaphorically grabbing them by the short and curlies. The UK Times described her as a, "Cross between Hunter .S. Thompson and Bette Midler", and she has shared the stage with some of the most established names in the comedy industry.

See a video of her stand up here.

Amber was a finalist in BC's Funniest Female 2014. Her performing highlights include: The Comics Lounge-Melbourne Australia, The Del Close Marathon NYC (Improv), Yuk Yuk’s comedy clubs - Toronto/Ottawa/Vancouver and various other comedy clubs and touring shows across Canada. In 2015, Amber co-created/co-hosted and performed in a live series of Tragedy Comedy Shows at Yuk Yuk’s. She also co-hosts Vancouverite, an independent monthly show that was selected to be a part of the JFL NorthWest Comedy Festival in 2016. Amber's absurd colourful style of self-deprecating comedy is based on her upbringing and adult life.

Michelle Hart is a multi disciplinary artist, specializing in theatre and improvisation. Since graduating from Mount Allison University with a theatre degree, she has trained, taught and performed with theatre institutions across North America to hone her craft. Michelle is the recipient of the Pat & Tony Freedom Fund, Outstanding Sketch/Improv Productions from My Entertainment weekly, and was featured on JFL42 Sirius FX Just For Laughs Festival. She has worked as a cast member for MSC Seaside, The Second City, Bad Dog Theatre Feature Players. Currently she is the Co Director of The Canadian Improv Games: Improvcamp, and improv instructor at Nelson Studio 88.

COVID Protocols: Show dates, times, and conditions may be subject to change as mandated by Provincial Health Orders. At this time, masks are optional and proof of vaccination is not required. Ticket-holders will be informed by email of any changes to these protocols.