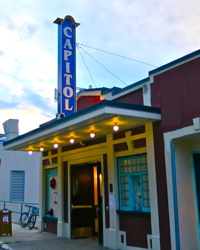 × This performance is at St Saviour's Anglican Pro-Cathedral, 701 Ward Street in Nelson

There is very limited seating available, and tickets are now only available at the door at the church.

If you have prepurchased tix, they will be waiting for you at the door at the church.

This evening's show will performed with the help of Jesse Lee (bass), Ralf Buschmeyer (guitar), Steven Parish (drums), Laura Landsberg and Allison Girvan (Don’s wife) on vocal harmonies, and Don on lead vocals, violin and piano. While the album features electric guitars and keyboards this performance will be mainly with acoustic instruments.

Before coming to Nelson to teach at the Selkirk College Music Program Don was a busy professional singer and film composer in Vancouver. Nelson audiences may know Don’s music through “Khaos”, the opera he composed with librettist NIcola Harwood or through the local performances he does on jazz violin, saxophone or voice.

See Don’s website(https://donmacdonaldmusic.com/carried) to pre-order a CD, hear album demos, or read about the album’s creation through the blog.