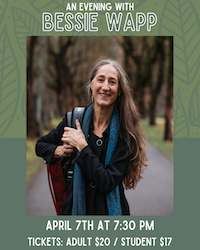 AS PER THE BC PUBLIC HEALTH ORDER, AT THE TIME OF THIS PERFORMANCE, TICKET HOLDERS MUST BE ABLE TO PRESENT PROOF OF BEING FULLY VACCINATED (7 DAYS AFTER 2ND DOSE) TO BE ADMITTED.

A 2006 summer residency at Oxygen Art Centre in her hometown, Nelson, BC, sparked a change. Bessie joined Oxygen’s faculty of instructors, began a large body of work based on autobiographical and family stories (Hello, I Must Be Going, Letters From Lithuania, Loco Phantasmo, Jesus Christ Superstore, Singing From Her Guts), and cultivated varied music projects (Klezmeridian, Bill Lynch Trio, Kootenay Divas, Bessie & the Back Eddies, Oxygen Orkestar).

Bessie continues to be an active collaborator beyond the region with Western Canadian groups (urban ink, The Only Animal, Old Trout Puppet Theatre) and festivals (Vancouver Int. Jazz, Calgary Folk Fest, Kaslo Jazz Etc.), as well as directing and performing in local stage productions (Matchmaker on the Roof, Hedwig, Orpheus).

Bessie is excited to have completed a winter 20/21 residency at Oxygen that produced a new work titled Pandora’s Jukebox.