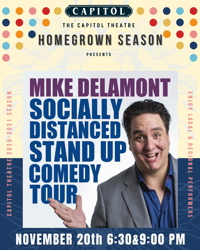 × Tickets: $30 There is a 50-person capacity so we encourage you to BOOK EARLY!

One of the most popular comedy acts on tour today, Mike Delamont has appeared on Halifax Comedy Festival, Just For Laughs and The Debaters with his hilarious style of stand-up comedy. Mike has been on our stage before with his hilarious show God is a Scottish Drag Queen, which is a winner of more than 18 "Best in the Fest" Fringe awards. His equally brilliant follow-up God is a Scottish Drag Queen 2: The Second Coming brought tears of laughter.

"Stand up comedy everyone can relate to!" - CBC